The successful achievement of a steam consumption rate of 3.5 kg/h･RT. Constitutes the highest level of energy efficiency in the industry,*1 and allows to excel in reducing operating costs in applications such as production processes and clean rooms where they operate for long period of time. *1 In the case of a double-effect unit Operating costs saved by 9 million (JPY) per annum (compared with conventional model V series / 500RT); energy efficiency improved by 20% and operating costs saved by 12 million (JPY) per annum by replacing the chiller that have been used for 15 years 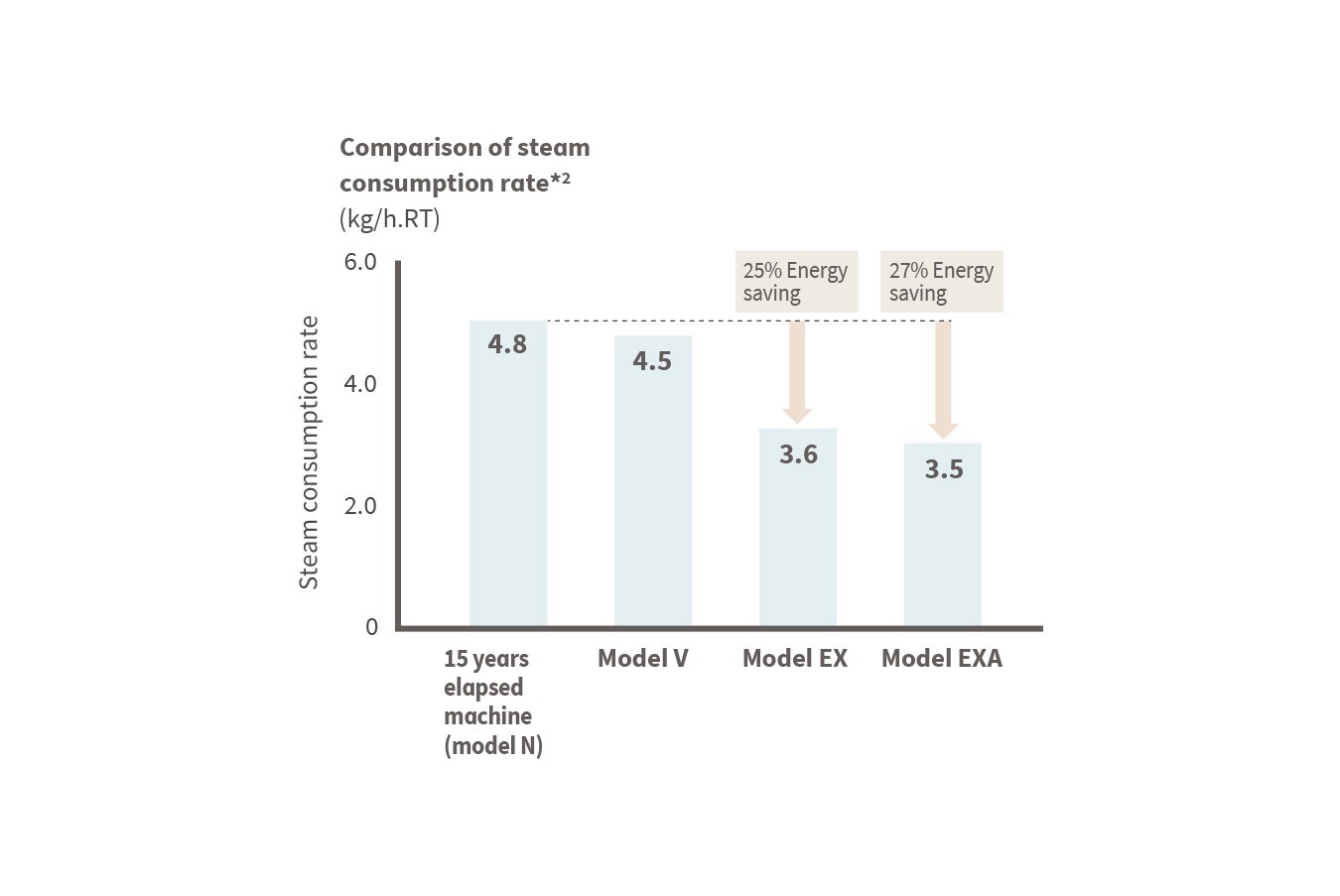 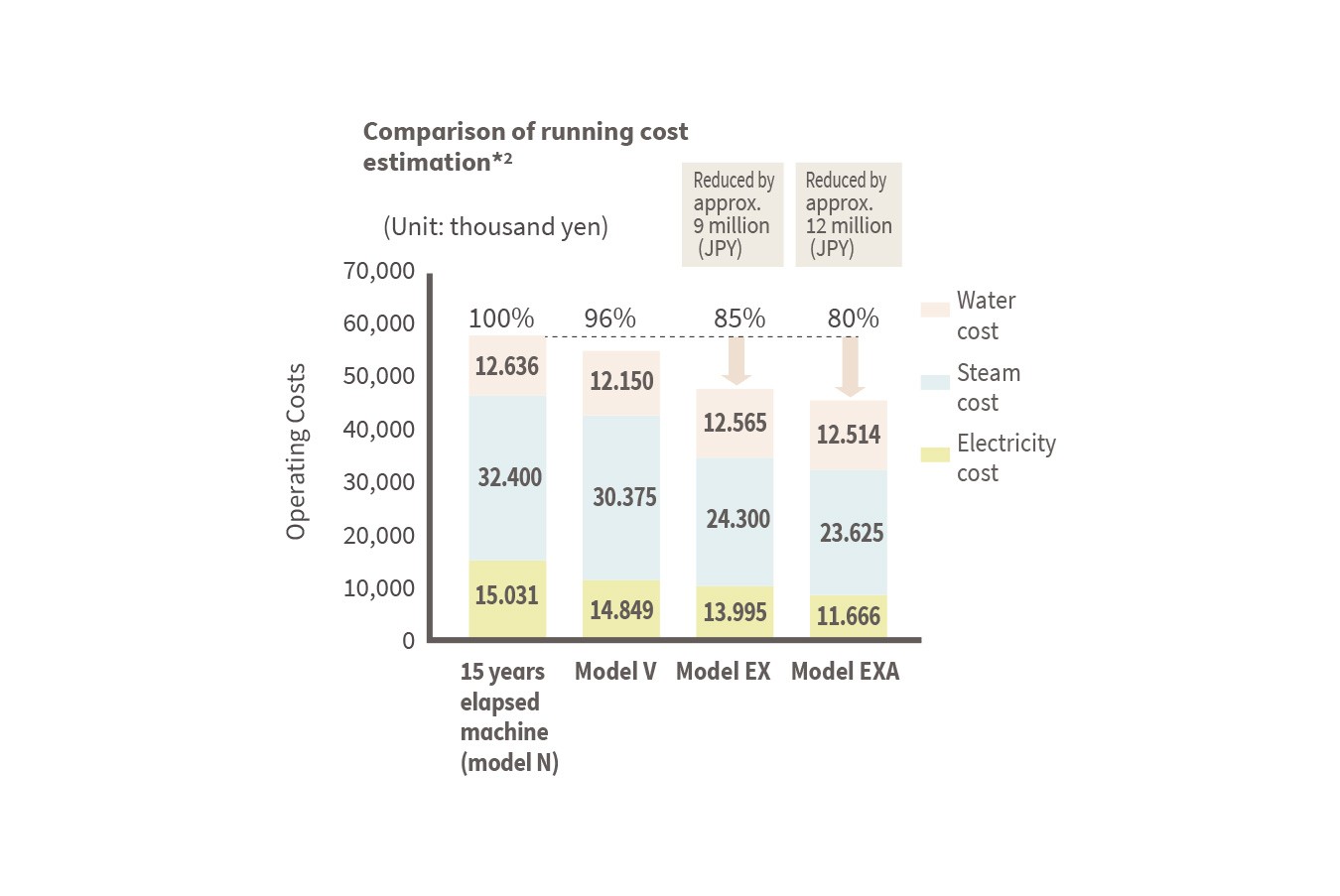 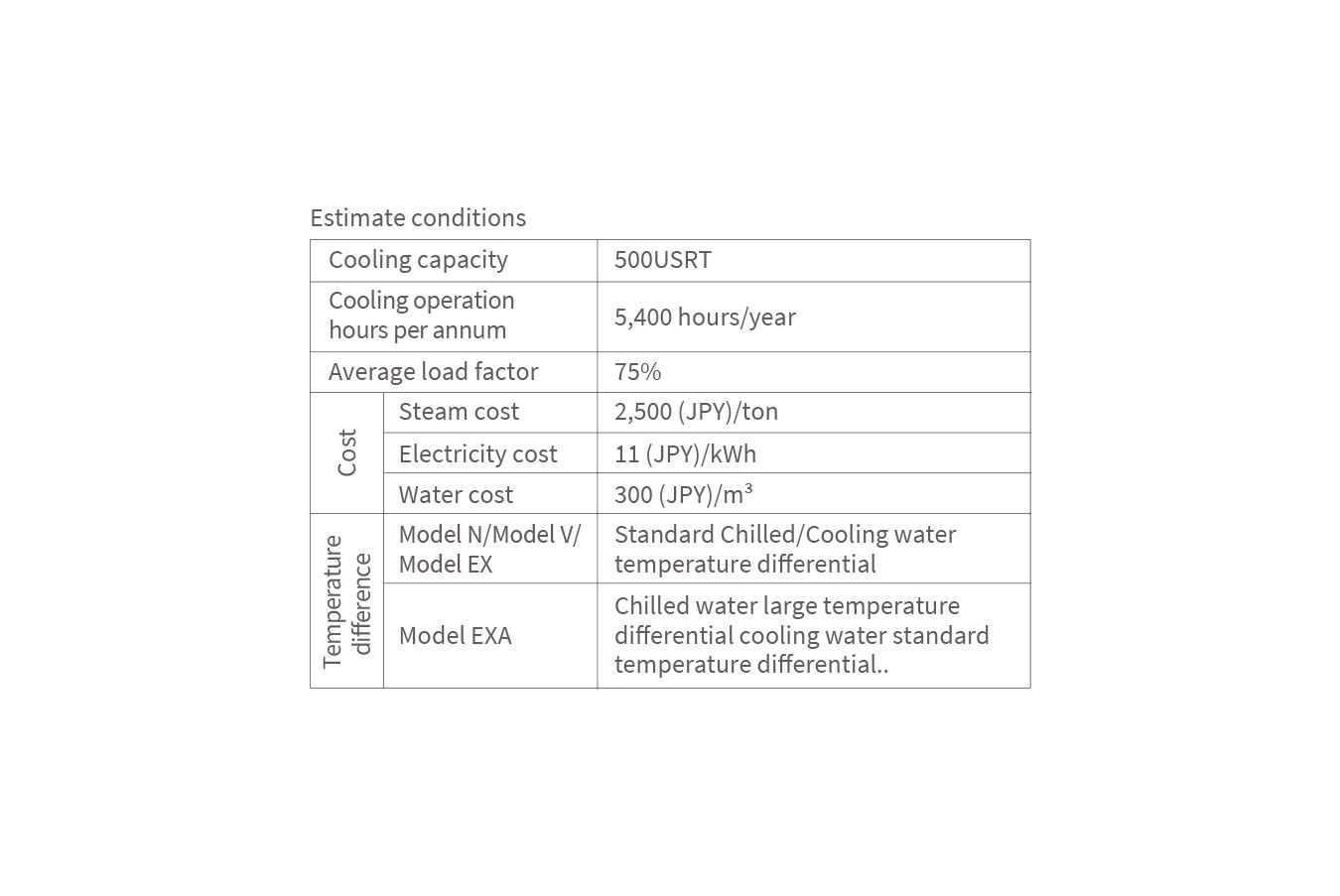 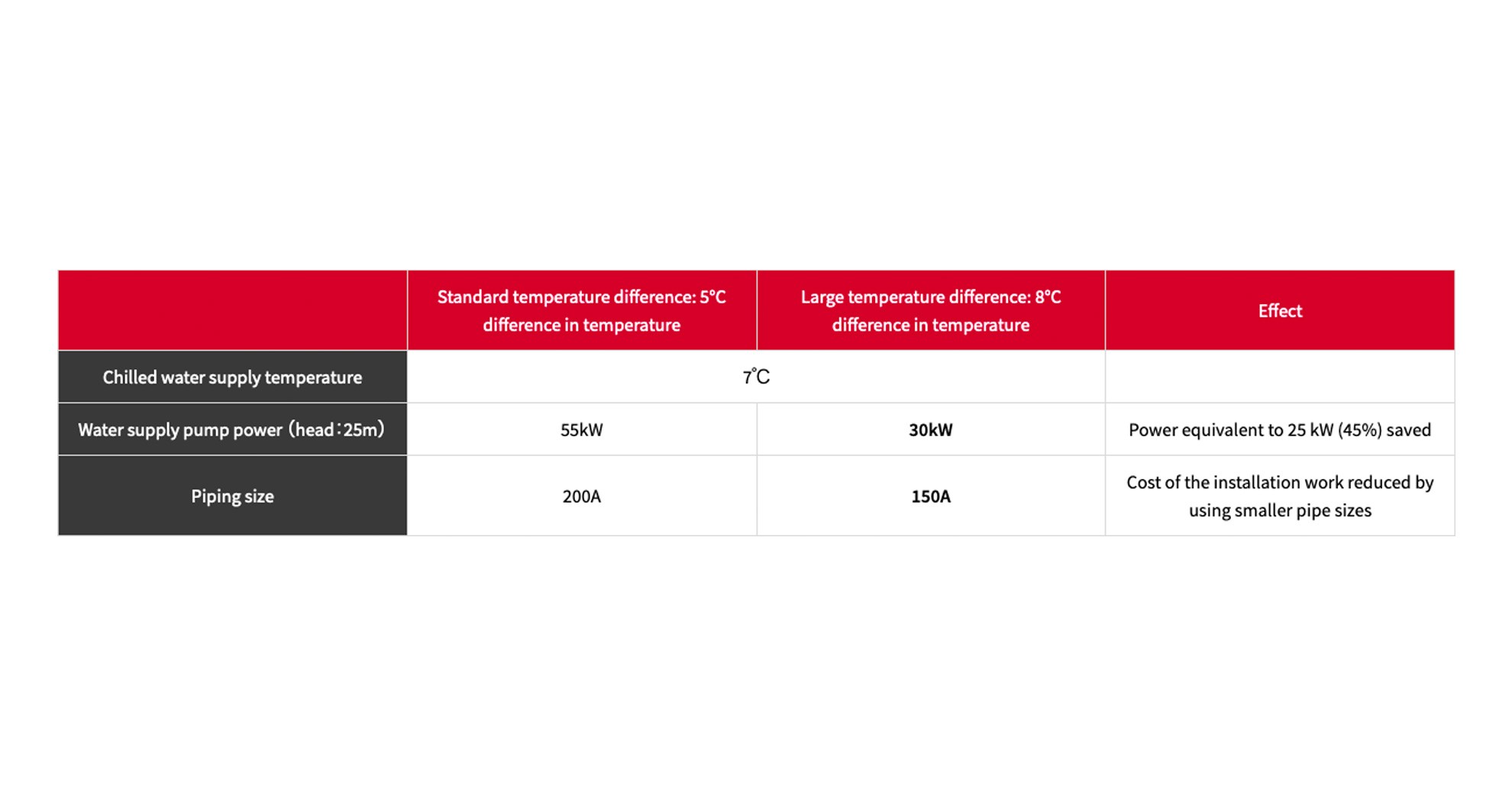 This double-effect steam absorption chiller uses a 2-stage evaporation and absorption cycle and plate heat exchanger. As a result, it reduces heat loss and achieves high efficiency easily while assuring high reliability and long life with a low concentration cycle.

*3 Intermediate temperature indicated in the image is for reference only. 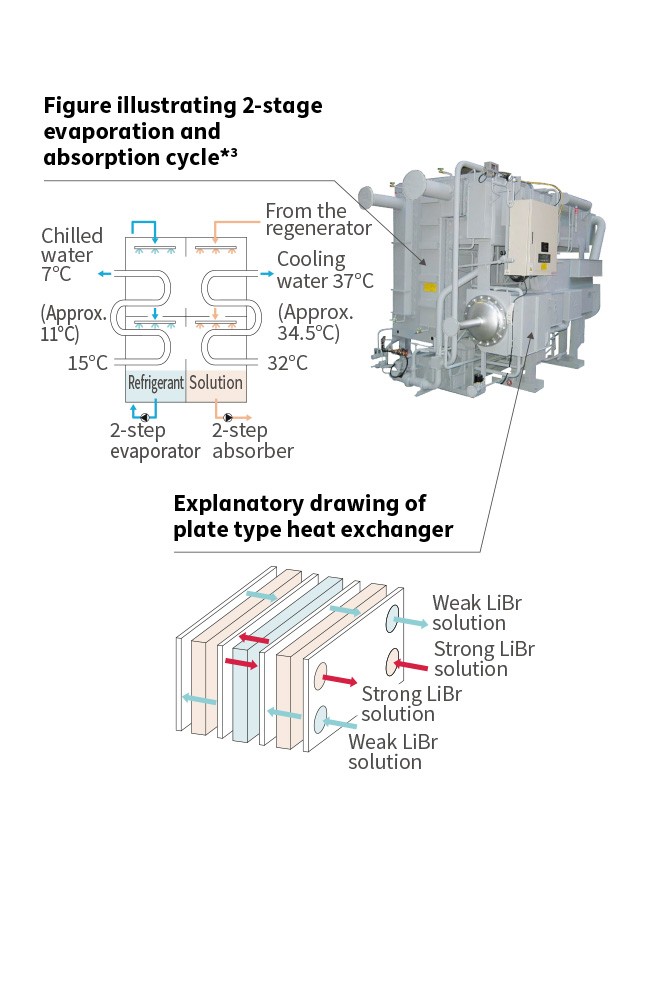 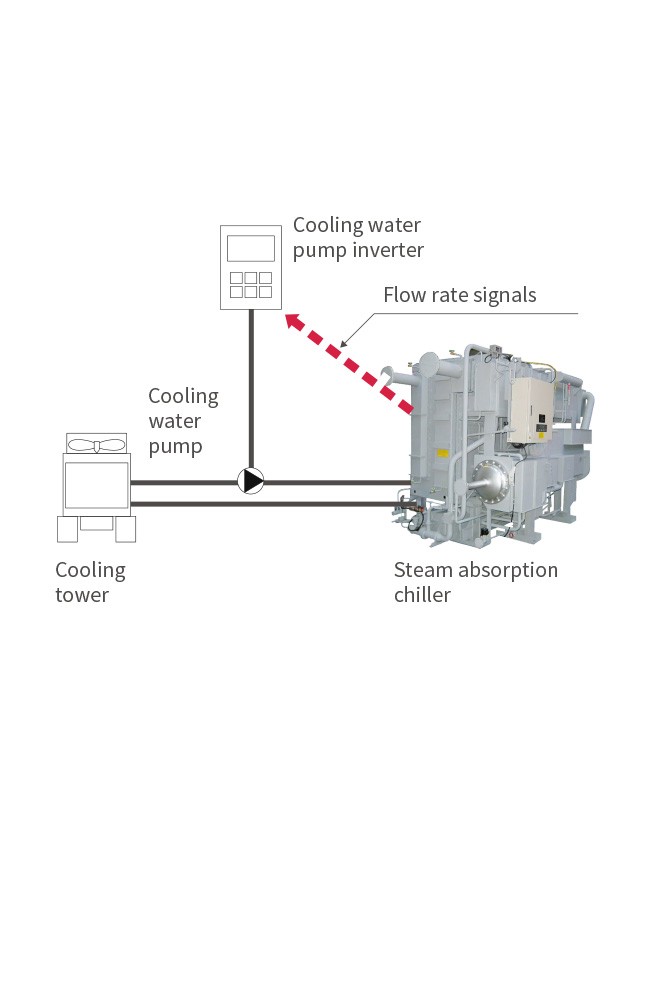 Conserving energy by suppressing the electricity consumed at cooling water pump. By monitoring the internal cycle (temperature, pressure, and concentration of the high-temperature generator), and while keeping a stable operating condition of the absorption chiller-heater, the appropriate variable-flow signals are output to the pump inverter to optimize the cooling water flow rate.

Using the standard frame, a total of 4,000 hours of cooling operations per annum are supported.
By improving both reliability and durability, for example, by employing the 2-step cycle, it is ideal also for those users who intend to run the chiller for long periods. 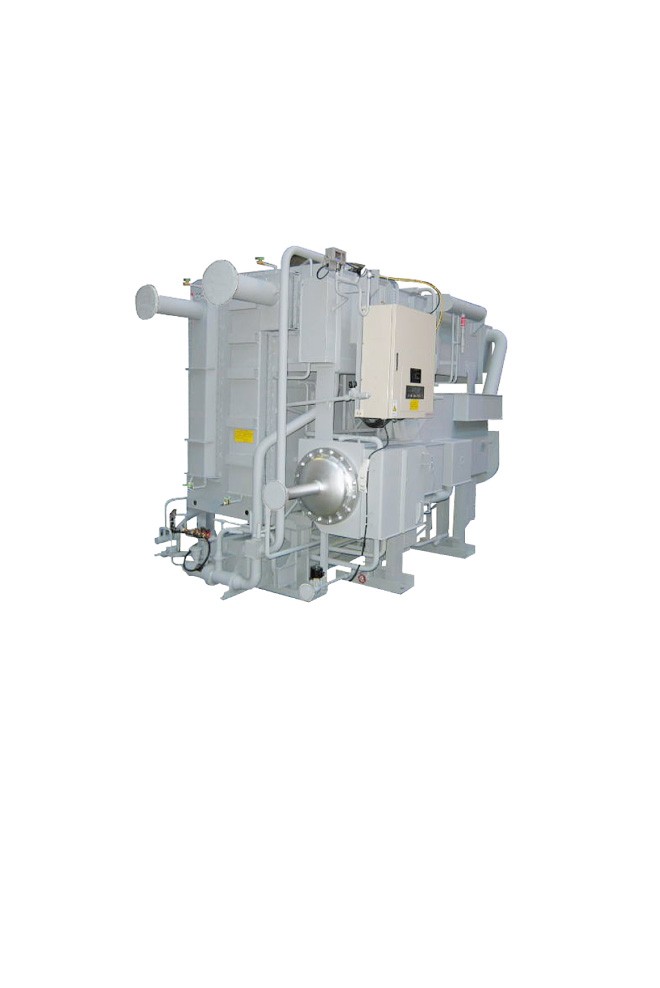 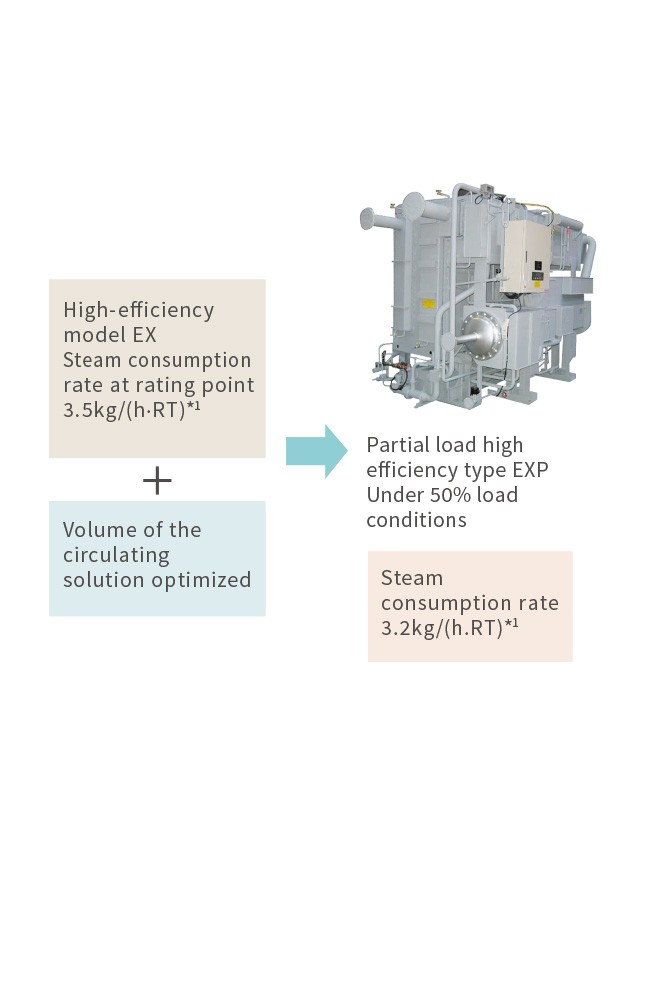 The operating profile of the chillers used for air conditioning over the course of the year is such that they are not usually operated for long periods of time under conditions close to 100% loads. They are normally operated under partial load conditions.

Therefore, improving the energy consumption efficiency of the chillers in line with the fluctuations in the cooling load throughout the year leads to reductions in the amounts of energy consumed annually.

*1 The values given as the steam consumption rate for both the EX and EXP are applied with a saturated steam pressure of 780 kPa(G) under Chilled water large temperature differential catalogue specification. Cooling water inlet temperature under 50% load is according to JIS conditions.

Manuals, brochures and other product literature. If you need any more information, please get in touch.

How can we help you?

–If you have any questions or require additional information, please get in touch.